As hard as it may be for some to accept this, we live at a time when 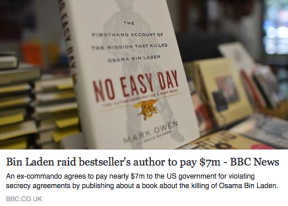 it’s very dangerous to expose the wrong doing of those in power.  Just consider the plight of those leaking the blatantly illegal activities of the British and US
Government to WikiLeaks.  An example of what can happen when publishing as non-fiction:  An ex-commando published a non-fiction book, No Easy Day, about the killing of Bin Laden, and was forced to hand over $7 million to the US government.  If he’d publish a fiction, ‘inspired by true events’, he’d have kept his $7 million and most readers would have understood his rationale.  For anyone that still doesn’t get it, I’ll quote Elvis Presley – “Truth is like the sun. You can shut it out for a time, but it ain’t going away.”  I hope that answers your question.

I had a great solicitor but my barristers primary experience had only been in traffic law and he’d never led a case like mine in front of a jury before.  He was up against a crack, highly experienced CPS barrister, shortly to be promoted to QC (who is now a judge, recently sitting on a high profile case, trying a famous Radio 1 DJ)!   Another of my team was just a law student, still at law college … I didn’t have a chance.

When we left the UK, following the events portrayed in Chequered Justice, to live in the rain forests of Madagascar (yes, that bit also happened), it was impossible to keep all the old court files, but I did keep a few documents to support my work of so called “fiction”… just for the skeptics.  Remember, in the 90s nobody believed that police officers “tweaked evidence” and few had heard of PPI Insurance and the corruption it stood for.   Nobody believed that people had their phones bugged by the state or that Metropolitan Police were shredding evidence they didn’t want seen.   We now know differently.  You may find the documents below of interest!

NOTE: In Chequered Justice the  documents below and the events being questioned were recreated in Chapters 35, 54 and 61

Below is my original “Complaint Form”… the one that went over the wall 18 months earlier!

The South Coast Prison Manager  writes to me confirming my complaint to the Ombudsman has been upheld and apologises!

🙂 There has been no further contact since posting the above reply… Silence speaks volumes!

This site uses Akismet to reduce spam. Learn how your comment data is processed.